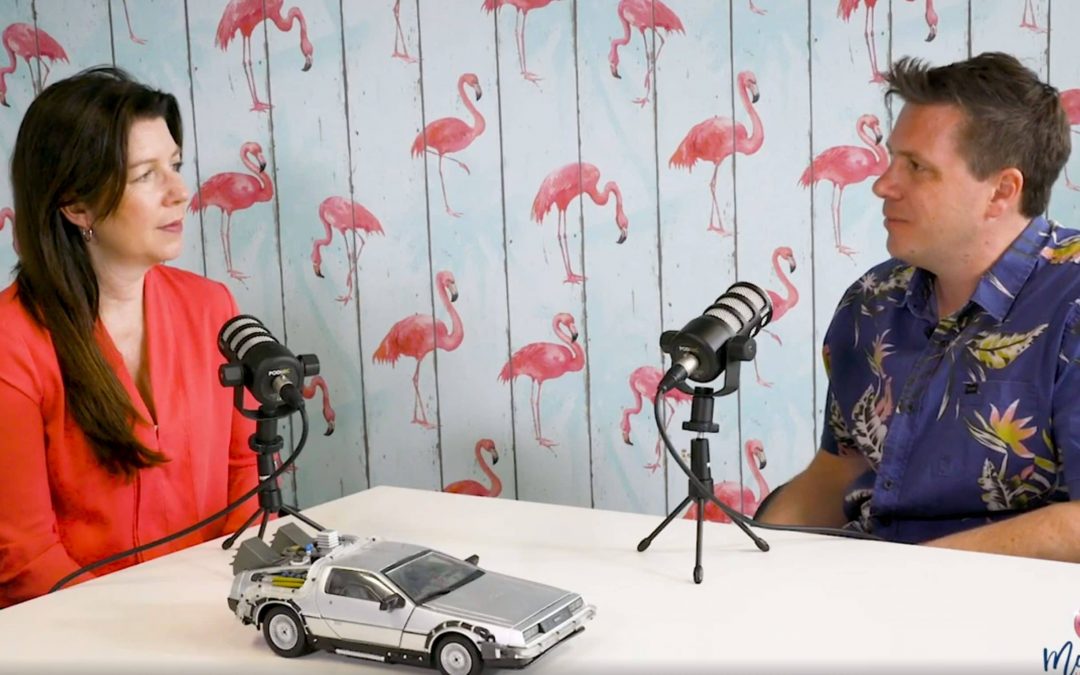 What is futurism and foresight and why is it important? If you spend any time reading or watching the news, you’d be forgiven for thinking that we’re all going to hell in a hand basket. So maybe looking forward is not something that you’re drawn to. But we’re hoping to change your mind.

Today, we’re all regularly reminded just how divided the world is. Which is why we have created a series to show you that the future is not set, positive outcomes are achievable and there is hope for the next generation.

If you haven’t heard of Futurists World, keep reading to learn what it is and why we made it.

In 2020, we embarked on a brand new project at our impact film production house. We specialise in creating content that inspires new ideas, moves humanity forward and contributes positively to the world around us. We’re also fanatical about science fiction and often find ourselves influenced by writer and futurist Arthur C. Clarke, whose predictions include the Internet, mobile phones and smartwatches.

Inspired by Clarke’s futurism and foresight, we developed an original streaming series called Futurists World. The show explores different profiles of the future through the stories of scientists, innovators and thought-leaders around various themes including the future of society, technology, happiness and time.

It brings together our team’s passion for forward thinking and change making and just like Clarke, strives to make the future engaging through storytelling.

Why did we decide to create our own streaming series?

Like many of you, we’ve found our anxiety levels peaking after a 30 minute news break. No report ever expands beyond the current catastrophe and between climate change, a relentless global pandemic and political unrest the world over, the future can feel, well, doomed.

You may as well sit in the corner with a sign saying ‘The end is nigh’ and be done with it.

Or you could spend some time with a futurist.

Because we’ve been producing impact films for more than a decade and have had the fortune to interview some amazing folks throughout our years in the industry. We’ve traveled from Australia to Bangladesh; Switzerland to the USA, and absolutely everywhere in between. We’ve had a our minds changed and our eyes opened time and again. And we knew we had to find a way to bring these visions into the zeitgeist.

Which futurists have been interviewed for Futurist World?

We have spoken to a raft of Australian and international guests for the series, including visionary Gerd Leonhard, entrepreneur Jack Delosa, disability-rights activist Ashla Rani and leadership guru Katherine Boiciuc, to name a few.

We’ve covered everything from healthcare to humanity; wealth to work; AI to advertising. Each guest brings his her own unique insights to the topic at hand, and while some take a more dystopian view over others, they all believe that humanity should be looking towards the future with a sense of hope. The belief that we, as human beings, can achieve extraordinary things is consistent. We just need the tools, the will and the foresight to make the future bright.

So, why does Futurists World matter?

We think that Futurists World is for anyone curious about life, the universe and the shape tomorrow might take.

Through the series, we want to bring futurism and foresight into the mainstream. If you’re interested in the future, understanding what’s most likely to come next and shaping it for the better (note: this should be all of us), this series is for you.

Futurists World is available to watch free on YouTube and is also released as an extended audio podcast.  Audio offers so much convenience – you can listen while you commute, exercise, cook, clean, work – the list is endless.

So, if you’ve found yourself in a bit of a rut recently and are seeking out some guidance on how to look forward, the series is sure to resonate with you There’s something for everyone and each episode will challenge the way you think about the future in a completely new way.

Why futurism and foresight is good for you

If you’re feeling a little negative about what’s ahead right now, thinking about a positive future might make a difference to your outlook. What do you want to happen tomorrow? Next week? Next year? Don’t be afraid to dream big – as we like to say at the end of each episode: the future really is out there. We just need to be brave enough to grab it with both hands.

We’ve all been left a bit shaken after 2020 – and it won’t surprise you that several episodes from the first series of Futurists World were filmed and produced during lockdown. It was an interesting experience, but sometimes you just have to roll with the times.

But now as we look towards the next iteration of the show, we’ll be leaning on new technologies to introduce you to inspiring thought-leaders from all walks of life. Just like humanity, Futurists World is in a constant state of evolution, but it continues to be a show for anyone who is curious about life and is passionate about creating a positive, progressive society.

Imagine that, a world with a shinning future.

If you’ve engaged with the show, we’d love your input. Leave comments, like posts, share episodes with friends and family, and get involved. Reach out and let us know what you’re interested in or what keeps you up at night? What are you curious about? Who do you want us to connect with? A great place to join the conversation and find awesome free content about the world of tomorrow is at futurists.world – so please, join now.

In episode 4 of the Moonshine Moonshot podcast we’re discussing why we made the series and how we’ve turned our impact filmmaking skills to a different purpose- to influence humanity to think long term and be future focused.

00:37 Why make a show about Futurism and Foresight?

04:08 One thing all futurists have in common?

06:04 The topic’s Futurists World covers and who stars in the series
&nbsp:

You can find Futurists.World at

Thanks for joining us and once you’ve watched or listened to Futurism and Foresight, please let us know what you thought? Do you have questions or do you want more information.

Your feedback will help us make more useful episodes so please, share your thoughts.

You can find Moonshine Agency on all the usual social media (links top right) or leave a comment here or on YouTube.

We look forward to hearing from you.